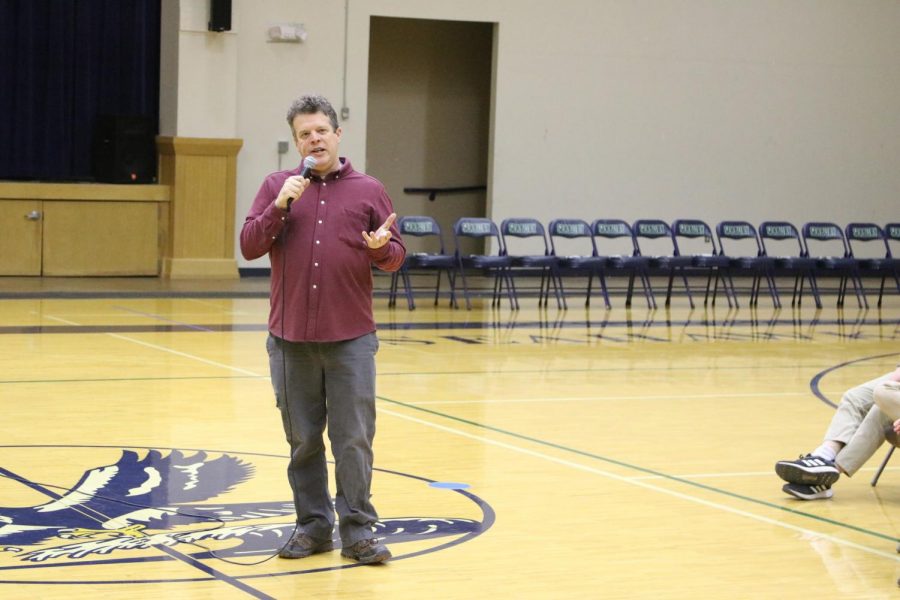 Father Rob Baldwin tells a story during chapel. Baldwin returned to Seabury after his three year absence this year.

Every Wednesday morning at Seabury, the entire student body gathers in the gym for a service combining spiritual lessons, general worldly wisdom, jokes which are simultaneously cringe-inducing and endearing and music that was popular before most of the students were born. While this ritual may seem confusing to the uninitiated, to the Seabury community, this is Wednesday Chapel with Father Rob.

The Very Reverend Rob Baldwin, or Father Rob, served a long stint as Chaplain at Seabury before a three-year absence as Chaplain Stephanie Jenkins took the role. Now returning this year, Baldwin, who administers services at Trinity Episcopal Church downtown, has more experience in giving Chapel to Bishop Seabury.

Moreover, preaching to Seabury is a much different task from preaching to a church congregation. At any Christian church, one could expect that almost all of the audience would be Christians, and those that were not would at least be interested in having a Christian experience. At Seabury, however, the same is not true. While Seabury is a religiously affiliated school, much of the student body is not religious, and many students who are religious belong to faiths other than Christianity, especially international students. Because of this, giving a Christian chapel to such a background presents a unique challenge.

Baldwin says that he addresses this issue “by, at the beginning, talking about fundamental truths, things that people can comprehend and understand.” He further says, “I think that normally when people preach in church, they say, ‘Jesus said this, so it must be true,’ and that’s not a context you can take in Chapel. Instead, what I say is, ‘Hey, here’s something that’s true, and by the way, for those of us who are Christian, how we understand that truth is informed by the teachings of and our relationship with Jesus.’ So it’s almost like you preach the sermon backwards.”

So far, Baldwin’s approach to Chapel at Seabury has been met with positive reactions from the community. Junior Morgan Orozco, who does not identify herself as religious, says about Chapel, “Especially at Seabury, there’s a lot of good discussion about morality and ethics, which, regardless of whether you’re religious or not, ties into one’s daily life and is beneficial for one’s whole being.” While one might expect a Christian service to be primarily of benefit towards Christian students, Baldwin’s Chapel successfully offers something to all students.