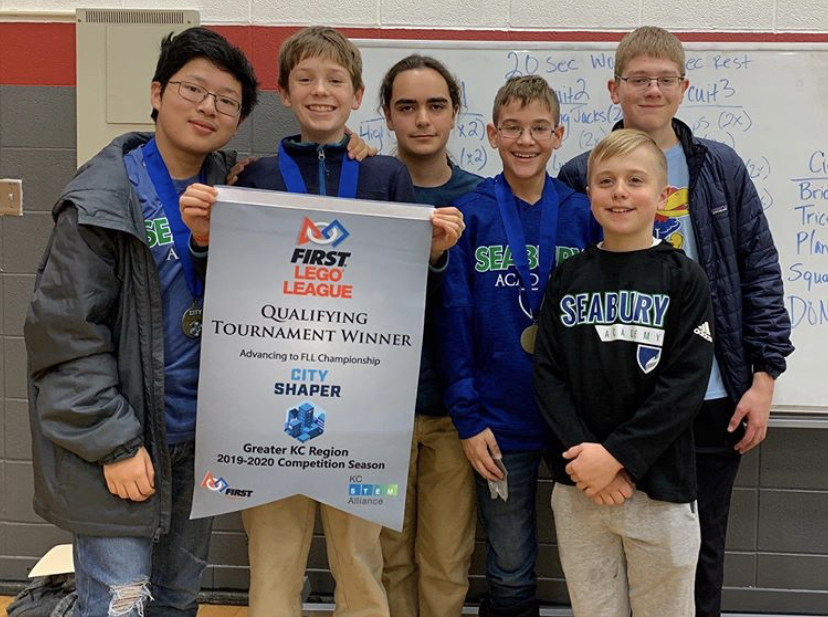 Seabury’s new robotic team at a competition. This new team has been extremely successful so far.

The emergence of Seabury robotics

With the emergence of more STEM programs at Seabury, activities like robotics and Mathcounts are now available to students who might otherwise not participate in extracurricular programs. Rather than shooting a basket or hitting a tennis ball, students can instead join a team of individuals with one goal, whether it be to complete a challenge, fix a robot, save the world with an idea, improve their public speaking or beyond.

The Seabury robotics team is comprised of a number of dedicated middle schoolers, all of whom have their own roles within the team. Their leader, Malcolm Maude, serves as the proctor, making sure that no fires or other disasters lead to the permanent closing of the school. The competitions are comprised of multiple sessions of judging the robots’ ability to complete the task, the ability of the team to work together and a presentation on a research topic that could be vital to the survival of humanity. These competitions not only rely on the ability of the robot but the programming and ultimately the functionality as a combined effort; if any one of the members has fallen short, neither the robot nor the presentation will be successful.

“Our team is part of FIRST Robotics (For Inspiration and Recognition of Science and Technology), says Maude. “The founder, Dean Kamon, said that he wants robotics to be seen parallel to regular sports. Robotics is not better than regular sports, but regular sports are certainly not more important. [For] an educational culture, he wanted to include competitive academics into the competition.”

Maude started the robotics team this year in the hopes of carrying over his passion for robotics and helping to grow that same fascination in younger students. “Essentially, I facilitate an environment where the kids can learn and have the ability to do what they’re interested in and what they want to do,” he says.

Yet another aspect–that of the character of the competitors–was taken into consideration when Kamon decided to start this league. “Our core values are created by us and our team is created by us,” says seventh grade Sean Ruddy. Ruddy explains that the team has developed a central hierarchy centered around Hugh Griggs with their core values being that of his leadership.

When asked about this structure, other teammates did not agree.“Oh yeah, Hugh sits on a ladder and yells at us but we just ignore him and keep working,” says seventh grader Xavier Klish.

Griggs, however, enjoys robotics not only because of his fantasy of ruling over the team: “I like that there are multiple sections of robotics. One section is the robot doing a task that can help the world but in a miniature version. And the presentation, I feel, helps the stereotype of nerds never talking to anyone. You . . . talk about core values and do a presentation along with researching a world-changing idea. Pretty awesome really.”

These various tasks are divided among the team and each member chooses what truly interests them. “I like working on building robots and adding accessories to complete a certain objective,” says Ruddy. “This means that you have to modify the base robot with whatever we have lying around.”

After many hard hours of working on the robot, building up their presentation and cooking up ideas for changing the future, the Seabury robotics team completed and successfully qualified for the regional tournament.

“We definitely did not expect to go the FLL championships and I really enjoy seeing all of our hard work pay off,” says seventh grader Krish Kulkarni. The team recently competed at regionals in hopes of making it to the national championship.

Robotics competition may sound like a bunch of nerds crowded around a robot, coding away furiously and yelling at one another to fix whatever is going on with the internal mainframe, but through the FLL program, Seabury students get so much more than that: a chance to climb outside their shell and speak about something they researched and really care about. They also get experience with robotics, practice programming and, most importantly, a team.

Seabury is offering a completely unorthodox sport, one in which an entire group of unique individuals can suddenly combine forces and brainpower to reach a common goal. Robotics is truly an amazing opportunity not only to get experience in an increasingly important part of our society but also a chance to truly change the world for the better and become a leader for the generations to come.

The Chronicle • Copyright 2022 • FLEX WordPress Theme by SNO • Log in